On the first Thursday of June, Manchester Orchestra toured their way up the California coast to The Music Box, an intimate venue on the star laden Hollywood Boulevard, in support of their third album ‘Simple Math.’

This Indie band from Atlanta has been making waves since their highschool days together in 2004.  Intimate lyrics accompanied by loud-soft-loud guitar and synth orchestra sequences have drawn a following in the L.A. area, making this a sold out concert.

Leather doors open into a lobby, the walls of which feature multitudes of dim lamps leading toward the bar area and the side paths to floor level and balcony.   Stationed just a couple exits from Indie music hub Silver Lake, it is not completely surprising that Silversun Pickups frontman, Brian Aubert is spotted carrying drinks to his friends awaiting the show.

From the plush balcony seats one can study the wall murals of nudes and musical instruments fused together. At 8pm the lights dim and the stage curtains arise.  The quickly growing audience welcomes Twilight Sleep, a four piece L.A. band who wastes no time with talk, but simply blends one beat into the next, seamlessly playing their electronica infused shoegaze reverb led by haunting vocals which sound like a modern day Siouxsie and the Banshees.  Next on stage is Sleeper Agent, a six piece female led band from Kentucky with a retro 70s look, offering noisy upbeat rock.

Manchester Orchestra takes the stage around quarter ‘til 10, leading the night’s set with their latest single “Simple Math,” the beautiful heartbreaking title track from the band’s May 10th release.  This is followed by the title track from their prior album, You Mean Everything to Nothing. 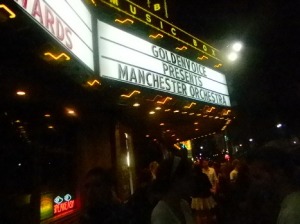 Frontman Andy Hull plays the cords of the angsty stoner song the audience has been eager for, “Pride.”  The casual blues tones of “Pale Black Eye” follow and the crowd is feeling the groove as Manchester Orchestra rips out a new tune, fast and heavy,  aptly named “Bananas” over which the crowd goes ape.  Indeed, by the time the band bellows the commands of “Shake It Out,” the floor crowd bursts into moshing.  The strobe effect stage lighting reveals that both lower and upper level crowds are ecstatic.

Manchester Orchestra ends with “Take Me to the River,” expressing the disheartening sentiment, “she finally knew that she couldn’t matter.”  The cheering concert patrons let Hull and his bandmates know that their music certainly mattered to each of them.

Manchester Orchestra jumped on stage for an encore including the fatalistic “Virgin” and a few words grateful words from Hull:  “It means a lot to me that you give a shit about this band.”  For this southern Indie group it might be well said that “things are never gonna be the same.”