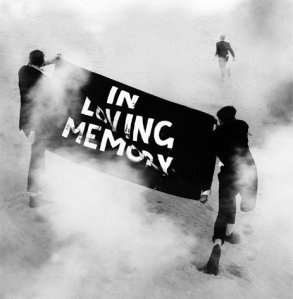 Together since 2005, the band is comprised of Jai Pyne, Ivan Lisyak, and Xavier Naughton.  Highly catchy melodies with a touch of quirkiness captures the playfulness of the Sydney based band that at times sounds like they’ve taken the 80’s New Wave baton from Talking Heads.  At other times, soaring vocals combine with soothing harmonies in a style reminiscent of U2’s “The Sweetest Thing.”  Mixed by UK producer Tom McFall (REM, Weezer, Snow Patrol), ‘In Loving Memory’ is an artistic collection of songs.  On this their sophomore album, singer/songwriter Pyne says, “We’ve shed any insecurities and have pieced together an album that embodies us as a band.”

The opening lines plainly reveal, “I pour out my heart for you.”  Perhaps that’s where this requiem album fittingly begins.  Instead of somber mourning however, ‘In Loving Memory’ focuses on celebrating life.  And how better to begin the celebration than with a song titled “Disco Connect”?  It’s an album intro that’s simple and likeable, though the digital phone beeps toward the end are rather disconcerting.  Still, they could be argued as appropriate given the title.
The album jolts and meanders through “Taller Than You Then” and “Dozens.”  Then comes the single, “Lung Sum,” quelling any doubts about the album’s interest factor.  Outrightly, song is a drunkard’s anthem.  An alcoholic faces a hopeless situation and opts to dive into the depths of fermented delirium.  It’s certainly not anything the general public should widely endorse, but dang if it isn’t a candidate for one of the catchiest tracks ever.
“Over There” enters seamlessly with its heavy synth and deliberate beat.  This flows directly into the carefree lines of “On Your Hand,” describing the joyous rise from the self-pity chasms.  “Lalala,” they sing, “now I’m back from hell.”
Undying love is reiterated with “Mechanism (Thick Mortar)”, which would make a great dance tune for a lively wedding reception playlist.  “I know this mortar is thick and… these bricks, they will hold until we get old and grey and die,” the songs says.  Indeed, the bricks will hold “’til the mechanism stops.”    This all-out assertion would complete the album nicely.  Unfortunately, ‘In Loving Memory’ drags with afterthoughts as The Paper Scissors can’t help but tack on three more tracks.

Through love and drunkenness, despair and dedication, The Paper Scissors keep the rhythm upbeat.  The outlook remains optimistic, and often that’s the best way any of us can get through.