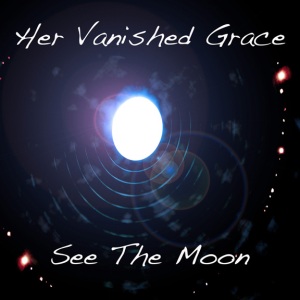 Steady and powerful, Her Vanished Grace has been a DIY band for a couple decades now. Their eleventh self-release, out since February 2011 is titled, ‘See the Moon.’

This power dream pop band has played the US Northeast from their New York City home to Boston, Providence, Philadelphia, and Pittsburgh among others, including clubs like The Mercury Lounge, Pianos, and The Bell House. Together since 1991, Nance and Charlie Nieland, Maria Theodosiadou and Billy Loose create a terrain of sweet melodies and noisy guitars that define Her Vanished Grace.

‘See the Moon’ exudes confidence in “I Know What Time It Is,” an achingly beautiful song with its atmospheric sound and soaring guitar. The strong opening then gives way to the flowery melodious fuzz of “Passenger.” Then just as you’re set to ponder your minute thread in history’s tapestry, “Desire” lightens the mood, spiraling upward, with breezy tones flowing throughout, the wistfulness sounding reminiscent of The Sundays. Lest your thoughts become too lofty however, the title track pulses like a heartbeat, propelling the album ever forward.
‘See the Moon’ doesn’t stagnate by concentrating consecutive songs on one particular mood. The music keeps you moving while the lyrics offer morsels to mull over. The upbeat harmonies of “Beauty Lingers” say, “I don’t want to change you, I only want to change your mind.” The breathy vocals of “Make It Lighter” tentatively invite you to “swim away and come back to me.” In highly appropriate artrock style “Dissolve” questions everything objective with, “could it be what we feel is the only thing that’s real?”
Her Vanished Grace can be delicately dreamy, as in the rose petal sighs of “All That Matters” and “Sparkling Diamond.” Especially captivating though are the heavy guitars providing background to the siren cries in “Fire.”

‘See the Moon’ does well in pointing out the goal, setting forth, and sustaining the journey. The album ends with “Stars Are Made of Fire Too,” a sort of shoegaze lullaby lamenting that “The summer’s over, we’re getting older.” Yes, even the moon must set, but it will most certainly return in its pure luminescent glory to be gazed upon again.

Hear the entire album on bandcamp.

3 thoughts on “Her Vanished Grace: ‘See the Moon’ — Dreampop Luminescence”